After two weeks in the secondary fermenter, the final gravity of the beer ended up at 1.014. With an (assumed) original gravity of 1.067, the ABV ends up being about 6.96%. I tasted the sample from the thief, and the vanilla was fairly prominent. I expect this to mellow somewhat during the bottle conditioning, which will make the beer quite nice. I primed the beer with 4 oz. of corn sugar before bottling, an ounce more than in the previous batch, which was a bit under-carbonated. I used several larger bottles this time, filling five 26 oz., five 24 oz., one 20 oz., one 18 oz., and 28 12 oz. bottles. I lost somewhere around 16 oz. in the process. (I had been coveting the narrow-lipped champagne bottles previously but now know that they hold the same volume as the larger one-off  bottles, the latter of which is far lighter, because they use less glass, and is also easier to cap.) I'll be giving away almost all of this batch as Christmas presents to family and friends so I've designed a label for the six-pack carrier and the larger bottles. 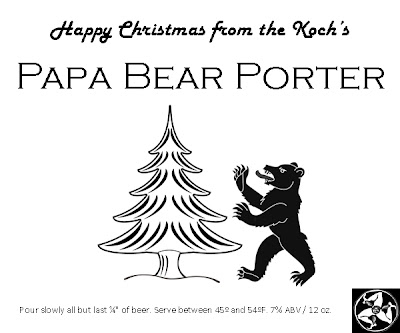 Not too shabby if you ask me.
Posted by Brad Koch at 3:46 PM