Well, "scaling back" one year later has become an indefinite hiatus. I'm happy to be writing and playing more music once again, and of course, I'm still riding my bike, but the brewing has sadly been relegated to the free time that I can only look forward to enjoying again some day as my kid(s) becomes more independent or, at the very worst, in retirement.

There is a silver lining, though. I ended up giving my gear to my brother-in-law and his father, whom I'm sure will have a lot of fun with it. With any luck, maybe they'll want to contribute some guest posts in the future. 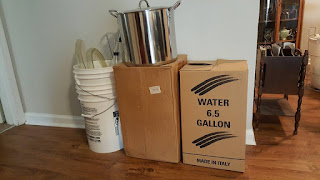 This is a sad post of sorts. I've made a tough choice to scale back on my brewing for a while. I've enjoyed three hobbies recently: making music, road cycling, and homebrewing. I've also recently ushered a new life into the world; we will soon be celebrating my daughter's first birthday! Over the last year, I've made almost no music and only a batch or two of beer, though I've managed to keep riding regularly (albeit not as regularly as I might like). Cycling is not a negotiable activity for me. I was an obese teenager, and my fitness is still something that will easily get away from me if I'm not mindful of it. Music had been the central focus of my former life. I was a fairly serious musician as a teenager and matriculated to a college with a noted program in Music Business to foster a dream of becoming a record producer/recording engineer. I played in bands throughout college and grad school, though I've found it much more difficult to stay on top of the songwriting, recording, and performing since starting my career six years ago. I've recently been re-bit by the bug, however, writing and recording a song for my daughter and consequently deciding to invest some saved Christmas money and a Father's Day gift on a new computer and recording software. I love making beer, and I will continue to do so--only less frequently. That means that this blog will be even more intermittent than it already is for the foreseeable future, but I hope that you continue to follow along, sporadic as it may be. Regardless, happy brewing, and be well.
Posted by Brad Koch at 3:38 PM No comments:

This beer turned out well. Re-pitching before bottling paid off--too well; the beer ended up over-carbonated for the style. Next time, I'll use considerably less corn sugar, perhaps as low as 2 oz. Because of the carbonation issue, the beer tasted a bit too acrid. Overall, though, the beer tasted good. The vanilla is balanced nearly perfectly with the coffee/chocolate notes. I was proud to give these gifts!
Posted by Brad Koch at 6:14 PM No comments:

After about five and a half weeks in the secondary fermenter at around 63°, the final gravity of the beer ended up at 1.016. With an original gravity of 1.074, the ABV ends up being about 7.61%. The sample tasted amazing with a near-perfect balance of coffee, vanilla, and chocolate notes and a mouth-feel that seems slightly bigger than the previous batches. I primed the beer with 3.5 oz. of corn sugar before bottling, and for the first time, I re-pitched yeast into the beer before bottling. The previous two batches of this recipe had been woefully under-carbonated, though I haven't really figured out why that might be the case. I'm hoping that new yeast will solve the problem. I'll again be giving away almost all of this batch as Christmas presents to family and friends. 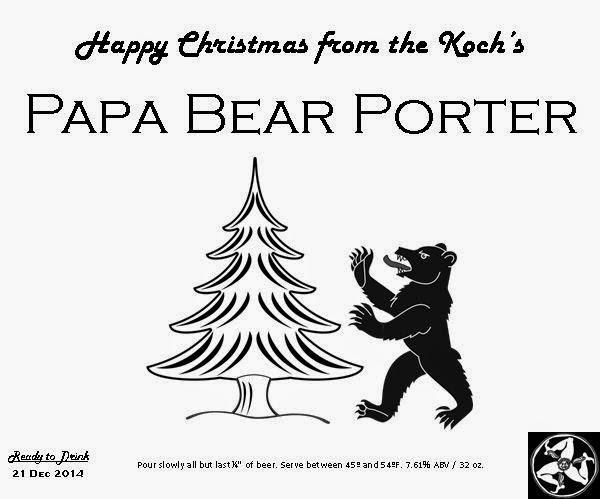 The fermenting ramped up within 24 hours of pitching, and there was obvious airlock activity for seven days after that at a consistent 67°. I halved two vanilla beans, and cut the halves into 1" pieces, which I added to the sanitized 5-gallon carboy. I racked the beer to the carboy for secondary fermentation after nine total days in the primary and measured the specific gravity at 1.014, which (if my measurements were correct) puts the ABV at nearly 8%. The sample had subtle coffee notes and strong chocolate flavors, a reversal from the previous batch. I'm planning to let the beer condition for four or five weeks before bottling.
Posted by Brad Koch at 11:45 AM No comments:

Today is a first for me; I'm introducing a friend to the joys of brewing. Clint H., welcome to the fold!
The original gravity was 1.074. I expect the final gravity to be around 1.017, which should put the ABV a little above 7%.


[1] - Turns out, there's just not much sediment to leave behind at this stage. It's not worth siphoning.
Posted by Brad Koch at 7:37 PM No comments:

Typically, I would just go with the Wyeast American Ale Yeast (#1056), but the shop only had a single packet of that so I got the White Labs California Ale Yeast (WLP001), the identical strain, as well. The previous batches of this beer had been under carbonated so I'm trying something new and will be pitching again for bottling. Previously, a clerk at the shop suggested steeping the specialty grains, setting the tea aside, and only adding it to the wort at knockout to avoid drawing out the acridity of the chocolate and black malts. I did this with the previous two batches of this beer, but I've grown suspicious that it's really not necessary. Another clerk at the shop today confirmed that I didn't really need to bother so I'll be doing a single steep/boil/chill this time.
Posted by Brad Koch at 7:28 PM No comments: